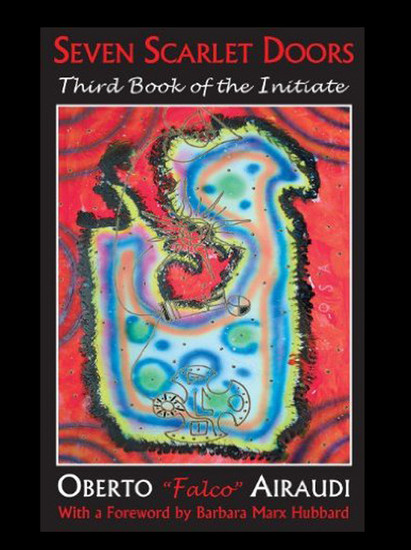 Seven Scarlet Doors is the third installment of a futuristic trilogy in which humans are living in a dystopian world. Capitalism has failed, a great cataclysm has occurred, and an “End Times” of our own making has left our planet in chaos. In the first book in the series, Dying to Learn, an Avatar named OroCritshna comes to Earth to teach and to guide the resurrection of the human race. But because our planet is shrouded in superstition, ignorance, and darkness, OroCritshna finds few students who understand his messages of Truth, Love and Light. Only one Initiate – Vadusfadam – attains enlightenment.

In Reborn to Live: Second Book of the Initiate, Monk Vadusfadam assumes the duty left to him by Master OroCritshna: To awaken human beings to their divine origin and help them spiritually ascend. However, time is of the essence. Vadusfadam must quickly gather a new crop of Initiates to defend Earth against the Forces of Darkness. These new Initiates must learn the rules of the “Game of Life,” free themselves from illusion, and reach enlightenment … before it’s too late!

In Seven Scarlet Doors: Third Book of the Initiate, Monk Vadusfadam leads a small army of Initiates in a battle against the Forces of Darkness. During this spiritual quest, the Initiates must survive dangerous tests and solve metaphysical riddles that will unlock the Seven Scarlet Doors, which represent the stages of enlightenment. The reader is invited to follow the clues and participate in this interactive journey, as Vadusfadam and his graduating class of Initiates steadfastly progress along the path to wisdom and eventually emancipate the entire human race. By the end of the story, the enlightened Initiates are “New Humans” ready to seed the “New Era.”

The Initiate series includes three futuristic novellas written by Oberto “Falco” Airaudi, founder and spiritual guide of The Federation of Damanhur in Italy. Originally, Falco wrote the Initiate trilogy for students at the Damanhur Mystery School and to honor Damanhur’s Temples to Humanity, which are often called the “Eighth Wonder of the World.” Now, Falco’s texts have been translated into English and are being offered to the public at large. The other books in the trilogy are entitled Dying to Learn: First Book of the Initiate and Reborn to Live: Second Book of the Initiate. The series also includes a free e-book entitled Road to the Central Fires: Prequel to Seven Scarlet Doors, which can be downloaded at The Oracle Institute website (www.TheOracleInstitute.org).

The Dream, The Message

Music of the Plants Book